Posted by Charles Beckman on November 27 2014 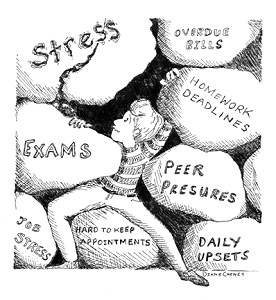 Famous essay by William Zinsser, “College Pressures”, may have been written more than three decades ago, but it doesn’t mean that it is any less relevant today than it has been back in the seventies. If anything, the pressures described by him have even grown in intensity since then.

It should be, however, noted that pressure is not necessarily connected with hardships of getting an education per se – on the contrary, it generally exists outside of the curriculum.

According to Zissner, there are four types of pressure students are subjected to: economic pressure, peer pressure, parental pressure, and self-induced pressure.

The source of economic pressure is simple: we live in a highly competitive era, and if a person is willing to do well in his or her life, they are looking to enter a prestigious profession and be as good at it as possible. The better the job pays, the more education costs, the more high-profile the university is, the harder it is to get into it. Only a fraction of those who are willing to enter Harvard or Yale are going to make it – and they know it, but they are willing to do their best to find economic independence and prosperity later on.

Parental pressure is going hand in hand with economic one – if fact, they reinforce each other. Parents want their children to be successful, to exceed their own results – and as a result they push them in the direction they deem necessary. Hence the overabundance of applicants to law and medical schools, which are traditionally considered among the most well-paid fields of expertise. It doesn’t mean that all applicants are eager to become doctors or lawyers – they are doing it because their parents, directly or indirectly, made them do it.

Peer pressure and self-induced pressure also constitute a heavily interconnected couple. Students feel pressure coming from their peers because they are cleverer, more successful in studies, spend more time studying, get better results at tests. They strive to be as good as the brightest student they know – but very often their perception in this respect is skewed, and they tend to overestimate the brilliance of those around them and underestimate their own powers. Thus peer pressure quite often has a lot of self-inducement about it – it is not other students who intimidate us with their intellect, it is our own imagination that makes them cleverer and us stupider than we are.

However, one should note that all these pressures are to this or that extent self-induced, because only those students who are really willing to do something, to sacrifice their time and efforts in order to receive education and, in perspective, good jobs, suffer from them. They are self-imposed challenges, just like education in general – there is nothing easier than to forego it entirely or decide to go easy and never spend too much effort. You will be able to lead a life of sorts afterwards, but it will be, most likely, deprived of success and accomplishment – not because all success demands education, but because it is the willingness to stay under pressure that makes people successful. And if you don’t want to suffer from it – well, it is your choice.

Thus, I can hardly see why pressure is a bad thing. College is not a kindergarten – you go there not to play around and maybe stumble upon your way in life, but to pursue a certain career choice and prepare yourself for the life of work. And, naturally, those who are willing to make sacrifices will do better than those who are not willing – it is in the nature of things. It is strange to condemn the situation that only follows the natural order.