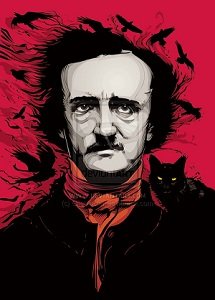 At a first glance, it is hard to understand what is so special about Edgar Allan Poe and why he is considered to be one of the most prominent figures in American – and, come to think of it – global literary history. He wasn’t particularly well-known as a writer during his life (he was considered to be a literary critic first and foremost), he didn’t write any great novels (he did write a novel, The Narrative of Arthur Gordon Pym of Nantucket, but it was nothing very much out of the ordinary and had very limited success) – when all is said and done, all he left is a bunch of short stories and critical essays and articles.

And it is exactly why he is so special.

It was Edgar Poe who almost single-handedly created the genre of short story and determined its future development into what we have today. Of course, there were short stories before him – but they were completely different in character and presentation, possessing something akin to anecdotal quality. They were considered to be rather written renditions of oral narratives rather than a thing in itself possessing a distinct literary quality. Even their common naming before Poe – tales – reflected it.

Poe, theoretically in his critical works and practically in his stories, created a set of rules determining what differentiates a good short story from a bad one and a short story from something that cannot be filed under this name. Of course, really good authors regularly dismiss these rules – but before dismissing them a good writer should know them, because it is this knowledge that allows them to become good.

The history doesn’t care about ifs, but it wouldn’t be an exaggeration to say that without Edgar Allan Poe the entire development of literature in late 19th and 20th centuries would have gone in a rather different way. A lot of writers wouldn’t have achieved success, various stories would have been written, and written in a different way. So yes, despite his rather limited literary legacy, Poe’s influence over the world literature can hardly be overestimated.

And, of course, one cannot omit the fact that it was Poe who basically created the entire genre of literature – detective stories. It is often dismissed as pure entertainment, but it plays an enormous role in lives of people – the entire segment of pop culture can in this or that way be referred to it. Thus the people who are very far from what is considered to be ‘true literature’ have a lot to thank Poe for – were it not for him, we wouldn’t have Sherlock Holmes, Miss Marple and Hercule Poirot and all that is derived from them, be it in literature, film or television.

In other words, Poe may not have created much himself, but he certainly knew where and how to apply pressure to change the course in which literature moves. And he managed to influence it in a way few other writers did.