DomypapersBlogWriting TipsThe Freedom Writers Diary – How to Write a Review?

The Freedom Writers Diary – How to Write a Review?

Posted by Charles Beckman on July 5 2022 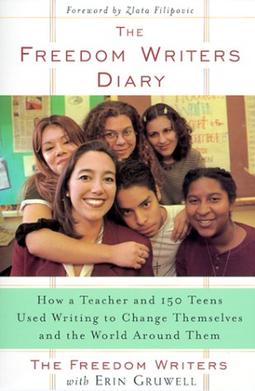 Students have to write a great variety of academic papers. They all are different to develop different skills in learners. Young people write reviews quite often. It may be a review of a book or a movie. At times, teachers assign pieces that were written and filmed. One of such pieces is “The Freedom Writers Diary”. It is a book by Erin Gruwell. Later on, it was filmed with Hillary Swank as the leading actress.

No matter what piece was assigned, you will not be disappointed. It is a very sensitive and captivating story, which focuses on very significant problems in society. It is a true story about racial discrimination, social equality, respect, dealing with pessimism, and so on. The story is good for GIES (Gender Issues Education Services) and MIEP (Mental Illness Education Project). We will explain how to write a great review of this masterpiece.

No matter what piece you are assigned (book or film), you should stick to general tips on writing a review. We will not write a full guide on the details you need to do. We will mention the most crucial steps. These are as follows:

The Freedom Writers Book: Clues to Dwell Upon

If you review a book, you need to focus on certain issues. You should know this book is a compilation of diaries, which were written by 150 students of Long Beach High School, California. Their teacher is actually the author of the book. She decided to describe all the hardships she and her students faced together.

Her students are unaware of such terms as the Holocaust and similar ones. They are disobedient, rude, and even cruel. They do not respect other races and cultures. Children are unbound toward moral norms. Thus, Erin decides to educate them by reading various books. Here are a few of them:

How did they help students? They built a strong foundation of new moral norms. When students read those books, they quickly discovered a lot of similarities to the problems they faced at the moment. They started to understand that they were totally wrong in the many deeds they did. Children found hope in literature and thus began to cure themselves. The teacher’s guide in literature was more than perfect.

The Freedom Writers Movie: What To Pay Attention To

If you review a film, you also need to know about certain peculiarities that can be disclosed in your academic project. The character of Hillary Swank comes to a school where such terms as disciplined, education, respect, equality, etc., are very faint. Her 150 students are perceived to be illiterate.

Of course, the film also shows the way the teacher educates her students via literature. They also make notes in their diaries about what they think about the books they were given to read. Those books taught them to be open-minded, handle pessimism, aggressiveness, despair, and so on. Children realized they have their voices, and they mean a lot!

The movie highlights one crucial theme for the United States of America. It is about dealing with multicultural society correctly. This piece promotes equality of social rights inside the community. It teaches you to find respect for people who are totally different from you.

The hero of Swank discouraged racism by giving such books as “A Child’s Life in Sarajevo by Zlata Filipovic”. She showed the cruelty of Nazis against Jews. It opened the eyes of youngsters. She develops democracy in education, integration of cultural equality, and so on. In fact, she promoted 5 major principles:

If you are assigned to write about the movie, be sure to disclose these 5 principles. Perhaps some of them may be disclosed in more detail. At any rate, you need to mention each of them.

If you are assigned to write a book or movie review of this piece, we can claim that you are lucky. This story is incredible and teaches us a lot! You can analyze and debate various themes that are currently relevant in most societies around the globe. Follow our smart tips to write it properly.

Mind that you can buy this book on Amazon to learn the story closely. Another option is to watch a movie if you are assigned to review it. This original masterpiece is captivating and teaches you a lot. It is a great competitor to many similar movies shot by Netflix, HBO, and other cinematography giants.