Posted by Kimberly Austin on November 25 2014 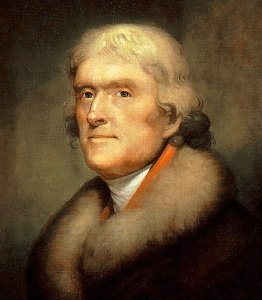 Thomas Jefferson is rightfully considered one of the most prominent figures in the history of the United States. A staunch proponent of freedom and rights of individuals as opposed to the power of the state, he always was and remains a symbol of American spirit, and his name is often mentioned by the representatives of modern right wing as such – as a true American, one of the best embodiments of American ideals, principles and untarnished belief in liberty and individualism.

Thomas Jefferson was not simply the third President of the United States and a very important statesman of his time; he was one of the Founding Fathers of the country, one of the men responsible for the creation of the country that in the course of time turned into the most successful and powerful nation in the world. His influence is seen not only in the way the USA developed since then, but in the way the whole world moved to this day. The words added by Thomas Jefferson to the Declaration of Independence, “All men are created equal”, are often considered to be the most important words in the history of America and, probably, the most important words in the history of modern world in general. He wasn’t the first who stated such a thing – but he was the first who considered that people are not just created equal but should stay equal for the entirety of their lives – at least in what concerns their responsibility before the law.

Unlike the majority of other presidents who officially supported the idea of small government, Jefferson remained completely true to his ideals after being elected. He abolished several popularly hated laws that imposed central authority over local administrations (such as Alien and Sedition Acts which main goal was to suppress those disagreeing with the policies of then ruling Federalist party), and strongly supported the rights of individual states as opposed to the power of government.

Jefferson effectively decreased the governmental spending and national debt – he believed that the country shouldn’t take loans from abroad and dedicated the majority of his two terms to eliminating the already existing debt by various spending cuts.

What is even more fascinating, in addition to introducing various cuts on spending, Jefferson also decreased taxes, eliminating several recently imposed ones, such as a tax on small-time whiskey producers that was widely resented among the population. According to Jefferson, a proper government should get more than enough funding via customs tariffs, and there is no need to tax its citizens. For the majority of his presidency this principle worked as designed, but turned out to be ill-fitted for the conditions of the Napoleonic Wars which almost completely stopped the trade with the Great Britain and France.

Another notable accomplishment of Jefferson’s administration (which influenced the situation in the entire world) was its victory in the first war the United States fought after winning their independence – the now almost unknown First Barbary war against Tripoli. The United States refused to pay tribute to the governmentally supported pirates of this state and crushed their resistance, forever ending the age of piracy in the Mediterranean.

However, perhaps the most well-known achievement of Jefferson’s was the purchase of enormous Louisiana territory, stretching from the Mississippi river to the Rocky Mountains, from the French. It is notable because it was the first time the United States extended their territory – before that nobody considered the possibility of the country expanding.

All in all, Jefferson’s presidency was a remarkable one; and hadn’t it been for the series of setbacks during the Napoleonic wars he probably could have achieved even more.