Why Do Students Cheat?

Posted by Charles Beckman on September 24 2014 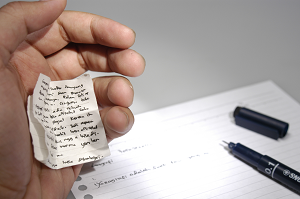 Is the burden too heavy? Poor time management? People tend to take the short route? Whatever the reason is, the fact is students cheat. Starting from elementary school, through high school, and all the way up to college, students cheat. While majority of young people recognize and admit cheating is wrong, almost every one of them has cheated once in his educational career. In the past, psychologists and sociologists regarded cheating as a deviant behavior. However, things have changed dramatically, to the point of which cheating is considered normal behavior. Everyone does it, so why wouldn’t you? There are several reasons why college students and students in general, cheat on exams and essays.