Posted by Kimberly Austin on February 19 2015 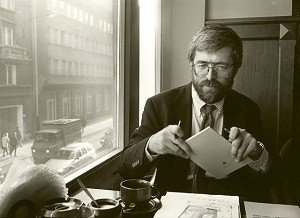 Stanislaw Baranczak, a famous Polish dissident poet and essayist, died on December 26 at his home in Newton, Mass, at the age of 68. Despite suffering from Parkinson’s disease, which made him leave his teaching career at Harvard in late nineties, the direct cause of death was pneumonia.

Mr. Baranczak was well-known both in his native country and in the West as an anti-communist activist whose works were samizdat pass-around despite being banned in the countries of the Eastern Bloc. His anti-communist sentiments and activism cost him his job at Adam Mickiewicz University of Poznan; he was soon offered a position at Harvard as a professor of Slavic languages and literatures, but was unable to move there because of being denied a passport by the Polish government.

When he finally managed to relocate in 1981 he quickly achieved recognition as both an independent writer, poet and essayist, and a translator from English to Polish and vice versa, thus building up connections between the literatures of these two languages.

In his independent work Mr. Baranczak mainly touched upon the life under Communist oppression, its hardships and petty absurdities. The latter he habitually characterized by describing a science fiction story by another Polish writer, Stanislaw Lem, about a society where everybody is made to live under water, where state propaganda constantly sing praises to the advantages of wetness and breathing above water is consider a capital offence, despite everybody having to resort to it from time to time.

Socialist Poland was exactly this – a place where people had to live in conditions unsuited for human beings and taught how happy they were supposed to be because of it – with everybody wishing for a breath of fresh air earning the status of ‘dissidents’.

This Lem’s story provided the title and image for the most important collection of Mr. Baranczak’s writing: “Breathing Under Water and Other East European Essays”, in which he talked at great length about important Polish writers, such as Bruno Schulz and Witold Bombrowicz, about works by Karol Wojtyla (who at that time wasn’t Pope John Paul II yet), about Lech Walesa, the leader of Solidarity labor union which played the instrumental role in dismantling Polish socialist regime, and many other things important both for the Poles and the world in general.

Mr. Baranczak was characterized by his equally excellent command of both English and his native language, which allowed him to do a great deal of work in translating English masters into Polish and vice versa, in addition to occasionally writing poetry directly in English – for example, his collection “Selected Poems: The Weight of the Body”.

Malgorzata Omilanowska, the Polish minister of culture and national heritage, acknowledges the importance of Stanislaw Baranczak and his work for Polish culture and freedom. According to her, despite paying a great price for the adherence to his views, ideals and beliefs, Mr. Baranczak did what he wanted to do with his life, dedicating it to poetry, literary work and beauty – and the Polish people won’t forget his name.