DomypapersBlogDiscussion TopicsAttitude towards Education in the UK: Degree is a Must

Attitude towards Education in the UK: Degree is a Must

Posted by Charles Beckman on June 2 2015 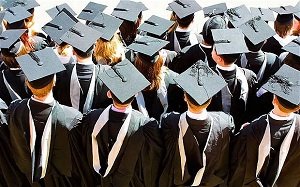 Or not? Latest surveys show that the country’s population is far from having a unanimous opinion on the subject, with percentages varying wildly depending on region. The staunch belief in the degree as a necessity ranges from less than a 25 percent of surveyed in North East of England to more than 60 percent in Wales. Residents of Greater London, Yorkshire, Humberside and the East of England also consider having a degree to be important, with more than a half of the surveyed agreeing with this statement.

However, if you look at the attitudes in the society in general, it isn’t hard to notice that the belief in the importance of a degree has been on a steady decline over the years. Getting a higher education doesn’t provide a guarantee of a well-paid job as it did, for example, several decades ago. The job market is oversaturated with young people with university education; half a century ago they would have had their picks of the jobs and any employer would have been happy to hire young specialists like them. Today they have all the chances of staying unemployed, and spending three years in a university is more and more often perceived as an expensive and time-consuming way of finding out what you don’t want to do with your life.

Employers, as usual, are the first to react to the changing realia of job market. They are no longer as attentive to degrees and credentials of their potential employees – today the actual work experience a person possesses is considered to be a much more important thing when they are considered for a job.

And that is why middle-class parents and young people about to decide on their future career are paying greater attention to prospects they would’ve scoffed at a couple decades ago. For example, according to a recent survey by the Edge Foundation and City & Guilds, about 57 percent of surveyed parents considered a young person with a plumbing apprenticeship or qualification to be ‘very employable’ – something most of them didn’t say about a person with degrees in History, English or Foreign Languages.

And it concerns not only vocational training. Jobs dealing with high-tech, especially IT, are often held by people with little to no formal education in this sphere. In other words, you probably have better chances of landing a good job in IT if you are self-taught, having attend specialized courses and keeping an eye on changes in the industry than if you spend three years undergoing standardized training in an industry that changes so fast that skills you’ve acquired today may well be totally obsolete in a year’s time.

There is a growing sentiment among the population that current educational system isn’t up for the challenges presented by the modern world. It either needs an overhaul or shouldn’t be treated as seriously as it used to be. But no one knows for sure if this sentiment has anything to do with truth – only time will show.