DomypapersBlogBook ReviewReview of “The Right to Write” by Cameron

Review of “The Right to Write” by Cameron

Posted by Kimberly Austin on April 1 2015 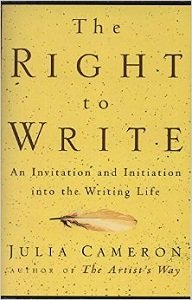 Julia Cameron’s is a pretty big name in the world of writing; her Artist’s Way made it from its humble beginnings of being self-publication to one of the Top-100 Best Self-Help Books of All Time.

The Right to Write, however, is different from its predecessor. The Artist’s Way was a structured, twelve-step program aimed at removing you creative blocks and letting you write freely (Cameron is one of the major proponents of freewriting, the practice of letting your thoughts flow freely onto the paper). The Right to Write is more of a collection of reflections on the nature of writing itself, and its main goal is to dispel some myths surrounding writing and writer’s vocation (at least Cameron believes them to be myths).

According to Cameron, writing is a joyful, natural process, and that people, in general, make too big a fuss about writing. Not in the sense it isn’t important – quite the contrary – but in the sense that writers aren’t some special kind of people in possession of unique and rare ability. Cameron believes that every person is, for all practical purposes, a writer – and the only reason why most people don’t write is because they are led to believe that it is some kind of esoteric, mysterious process only possible for the chosen few.

Another strong belief of Cameron’s she imparts in the book is that writing is one of ways of connection with the divine, akin to prayer, which is another reason for all people, not just those professionally dealing with writing, to take up this activity.

All in all, the book is a collection of essays and exercises, a bit unfocused, but interesting to read, especially if you haven’t read Cameron’s books before.

However, no The Right to Write review would be complete without acknowledging one fact that may not be very pleasant for the fans of her work. She falls into the same trap most self-help authors do, especially the ones who managed to write a very popular book based around a single idea.

It may even have been an original and interesting idea – otherwise the book wouldn’t manage to be successful. But these writers soon run into a problem: fans expect something new while they have already said everything they had to say in their breakthrough, original book. They may have developed some additional techniques over the years, or smoothed over some rough patches, but far from enough to fill an entire new book with.

Thus, if a writer is willing to stay popular, he has to write new books regularly – but not having anything new to write, they have to write more or less the same book over and over again.

The same happened to Cameron and The Right to Write. It is the same ideal all over again, the same set of beliefs, even some of the exercises she offers are the same as in her iconic work. It doesn’t mean it is a bad book – but it means that if you’ve read The Artist’s Way you’ve probably already read most of this one as well.