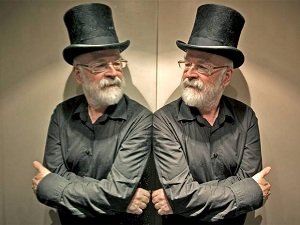 British writer Terry Pratchett died last Thursday, March 12, due to complication of Alzheimer’s disease he was diagnosed with eight years ago.

Undoubtedly one of the best-known modern satiric writers, he wrote over 70 books, most of them set in Discworld – a fictional universe that started out as a parody of second-rate fantasy clichés and over more than thirty years of its existence evolved into a vibrant, living world with its own lore, recognizable characters and a massive fanbase. He sold more than 85 million books and was the most read British author at the beginning of the 21st century, surpassed only by Joan Rowling.

Pratchett was known for his very specific style that sets his books apart from any others – you can recognize a book by Pratchett just by opening it in the middle and reading a couple of lines at random. His books combine serious topics with humor (sometimes pretty dark, but still), fantastic worlds with very real and all too familiar problems, quirky, aphoristic style with engaging storylines and original images.

However, Pratchett’s legacy is not limited by his literary creations. After being diagnosed with Alzheimer’s disease in 2007, Pratchett promptly disclosed his condition to the public and since then often spoke about the importance of Alzheimer awareness, research in this sphere and removal of social stigma from those suffering from it. He didn’t, however, simply talk about it – in addition he donated one million dollars to Alzheimer research, knowing that he was very unlikely to benefit from it, but hoping that it may ease the suffering of those who will come after.

It was largely due to his efforts that Alzheimer’s disease and other kinds of dementia were brought under the spotlight of public attention. It resulted in increased support of various Alzheimer research charities and greater attention from the world’s governments – in fact, the G8 announced it as one of their immediate goals to create either a cure or effective treatment by 2025. Too late to save Pratchett, but he would certainly approve of it – at least if it really comes to pass.

Being diagnosed with an incurable illness did little to dampen Pratchett’s spirits. He took the blow philosophically, never shied away from discussing it and kept writing and communicating with his fans until it became physically impossible, always remaining cheerful and brave in the face of the inevitable.

Pratchett was never afraid to discuss in his seemingly light-hearted works such difficult, deep and inconvenient topics as life and death. In fact, he made Death a recurrent character in his books, and not an unsympathetic character at that. Moreover, it is the only character that appears in almost all of the 40 Discworld novels, becoming one of the Pratchett’s most recognizable trademark characters.

It found a reflection in a way the world was told about Pratchett’s death. Soon after his death his daughter, Rihanna Pratchett, made these three last entries in his Twitter account:

AT LAST, SIR TERRY, WE MUST WALK TOGETHER
Terry took Death’s arm and followed him through the doors and on to the black desert under the endless night.
The End.