DomypapersBlogEssay ExamplesThe Essay on Syrian Refugees Crisis: Is There Place for People Who Run?

The Essay on Syrian Refugees Crisis: Is There Place for People Who Run?

Posted by Kimberly Austin on November 28 2018 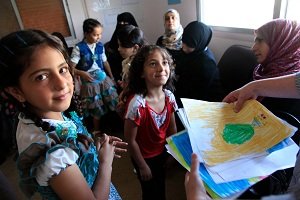 Just imagine that today every minute, about 31 people around the world are forced to leave their homes! This information is given by the European Commission. Most of these people are forcibly displaced because of conflicts and violence, persecution, natural disasters, and so on. Since the beginning of the Syrian war in 2011, many have fled the country and settled in the neighboring states, including Lebanon, Turkey, Iraq, Jordan, and Egypt. Currently, there are 4 million Syrian refugees registered in the region. By mid-2015, the World Bank’s estimated cost of the Syrian war for the Middle Eastern countries was $35 billion. This load is too heavy to endure, and this is why refugees have been aiming at the European countries for a couple of years now.

The Syrian problem is growing into the biggest migration crisis in Europe, and there is no end to the crisis in sight. At the moment, there are over 9 million refugees seeking asylum. Now, it’s your turn to explore this hot topic in your essay. Let’s do it as required by your instructor – referring to the reliable information and following some formatting requirements.

What to Say in My Essay on the Syrian Refugees Crisis?

Primarily, you should grasp the term ‘refugee’. It is a person who is forced to flee his or her country because of persecution, war, or violence. It is what happened to Syrian citizens. In 2012, when the refugees mostly fled to neighboring countries and Turkey, Greece was cautious enough to strengthen the borders. In 2013, Turkey and Bulgaria joined and started building their fences too. Now, Turkey hosts up to 3,2 million Syrian refugees according to the recent data. This makes it the country that has spent the largest amount of money — over $5.5 billion — on providing shelter for the largest number of middle-eastern immigrants. Although it was estimated that in 2014, Syrian refugees started more than a thousand businesses in Turkey. Many immigrants cannot provide for themselves and their families. That is why they are aiming at Europe where the economic conditions are the best, namely Germany, Sweden, Austria, and the UK.

Apart from the huge sums of money paid (usually over $1,000 each), the refugees’ journey is long and exhausting; it often takes weeks to get through Turkey and then to the Greek territory. In 2014, over 200,000 Syrian people set off to Europe using unconventional routes by sea and land. As a result, over 3.5 thousand of them have drowned. In 2015, nearly 2 thousand did not make it. Almost all of them go through horrible anti-sanitary conditions that result in diseases.

Europe does not always welcome immigrants. For example, incapable of coping with crowds of Syrian refugees, Hungarians have been trying to fence off the flow of Syrians. They had to close Keleti train station in Budapest not to let them further into the continent. A number of Syrian immigrants were halted on their way to Austria and taken to the camp in Bicske, not far from the Hungarian capital.

The problem is that no country in the European Union has a valid immigration policy to deal with the current situation. Right now, every country has to decide on how many refugees it is willing to accept. Just very recently, Germany agreed to take in 800,000 refugees according to the Independent. In order to cater to the immigrants’ immediate needs, the country needs around $5 billion, and the officials believe that it is manageable. Some countries, like the Kingdom of Denmark, refused to accept any number of Syrians.

In The Washington Post, there are photos of the Turkish police carrying two drowned Syrian children flooded the world’s media. The further investigation revealed the story of a Kurdish family fleeing from Turkey to Europe in a rubber boat, of whom only the father survived. They fled to Turkey forced out of their country by the ISIL troops, but could hardly provide for themselves there. This story has shaken the world’s community. As a result, the countries like the UK have increased the number of refugees they are willing to accept.

According to the 1951 UN Refugee Convention and the EU Charter of Fundamental Rights, the European countries have the obligation to provide asylum to those who seek it. This is not a matter of politics and economy, but of basic human rights. There is no person that should live in fear for their life and the lives of their close ones. While European countries are deciding on whether they are going to accept the refugees and how many of them exactly, the clock is ticking. The fear of the biggest migration crisis in the past 70 years can be well-understood, but it is now time to unite and provide new homes for those who need it most.

How to Write My Essay on the Syrian Refugees Crisis?

Throughout your academic career, you are often asked to write essays. But all essays differ from each other. First of all, you may have to work on different topics. So having the topic “The Syrian Refugees Crisis” under consideration, follow the next tips on how to explore it in details.

As the additional step, you can analyze some good essays on similar topics. At the research stage, you’ll probably come across really well-written papers about your topic. Try searching via Google Scholar, JSTOR or Ebsco to find some relevant research papers with bibliographies you can use on your own. It isn’t prohibited! Just decide if any given idea is worthy of your attention to be mentioned in the essay. Now, you have all the necessary information to deal with the topic “The Syrian Refugees Crisis” successfully. Have pleasure from work!