Job Satisfaction in Employees over Age 50

Posted by Charles Beckman on October 19 2014 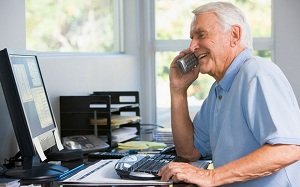 Some people would say that at 50 it is too late to make any plans for the future or change anything in your life. If you’ve stayed in your job until this age there is no other choice but to select stability and spend the years until retirement in the same position. After all, it is what all people do.

Unless you are a late bloomer, of course. This term defines people who have radically changed their life at an age when life is often considered to be coming to an end: at 40, 50, 60, in some rare cases even 70 or 80. The fact of their existence proves that it is never too late to do something with your life, especially if you are not satisfied with how it has been going so far.

And if you want to get acquainted with individual examples, read the book “Late Bloomers” by Brendan Gill. Written almost two decades ago, it is still one of the best works you may find on this subject – Brendan Gill collected the stories of 75 individuals who found their purpose in life well after they should have resigned to their fates and accepted slow decline. Instead of that they made the second half of their lives fulfilling, interesting and fascinating.

According to the stories of these people, gradual movement in a chosen direction is far from being necessary to achieve success at any stage of your life. For example, Harland Sanders, also known as Colonel Sanders, in the course of his long life has tried himself at being a fireman, a lawyer, an insurance salesman, a secretary in a ferry company, a filling station manager and a dozen other professions. However, he wasn’t really interested in any of these ventures, nor did he succeed much in them. This all changed after he started his Kentucky Fried Chicken franchise at the age of 65, which in the course of time turned out into an enormous international enterprise.

Similar to his is the story of Raymond Kroc, who has been a middling milkshake machine salesman until the age of 52, when he got tired of his job, left it and joined McDonald’s to turn it into the most successful fast-food chain in the world.

These are just two examples from 75, and these 75 are just a small fraction of people who refused to accept what their life was giving them and made something else entirely of it.

The majority of these people didn’t have any specific background, education or enormous fortune which would allow them to easily change their direction in life and their lifestyle in general – they were ordinary people, just like you and me. The only thing that made them different from the majority is the fact that they weren’t afraid of trying something new, of leaving the stable situation they found themselves in and starting out anew – even though those around them certainly found their efforts to be amusing that late in life. They did nothing that cannot be repeated by anybody else – assuming this anybody has real will to do so.

“Late Bloomers” teaches us that if you are not satisfied with your job, that if you are being kept in your profession by nothing but your own inertia, apathy and fear of change that is inherent to all human beings, the difference between change and status quo is your will to do what you want. If a person really wants to find fulfillment and satisfaction in life, there is nothing to stop him or her, and it doesn’t matter how old he or she is.