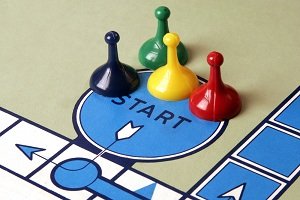 For all intents and purposes, at the most basic level the nature of education – the way it is done individually, the way it is perceived, the way it is developed – remained more or less the same for as long as the history goes, with rare attempts to tentatively step aside from the trodden path scattered here and there.

However, in general it was always the same. Perhaps today we pay less attention to memorizing and mechanical repetition, but at its core education is the same it was a thousand years ago. It is something that requires effort, something inherently unpleasant. When somebody genuinely loves learning, we feel glad but somewhat surprised – because it’s not the way it is supposed to be. Not the way it usually is.

But we live in times when many age-old and seemingly unchangeable paradigms move aside to give way to something new. And perhaps in a foreseeable future we’ll see education that will be different. The first signs of it we see in the so-called theory of gamification of learning.

To tackle this subject one has to understand that gamification of learning is not the same as game-based learning. Gamified learning environment doesn’t mean that students play video games in the process, or use programming tools to create their own games, or investigate the way games work. On the contrary, in gamified environment games are obvious by their absence.

Instead of introducing games and gaming into education, the proponents of this theory seek to study which particular elements of games produce the proverbial ‘fun’, which elements create in players the craving to go on, which elements make it enjoyable to take part in gaming activity, prevent it from getting boring and motivate gamers to get back to their favorite pastime.

People really engaged in a game regularly – within its limits – show initiative, ingenuity, attention to details, persistence and non-standard thinking, all the while taking part in an activity that won’t bring them any tangible benefits no matter how good they are at it. So what are the elements that trigger that kind of attitude and behavior?

Gamification of education seeks to create new learning environments that would borrow these principles and build up on them. Visible progress, leveling, great degree of personal control, clearly understood criteria of success, possibility of trying and failing without negative consequences and so on – these are only the most basic things that education may borrow from gaming.

Somebody may say that it is not serious, that education is not a game, that something that plays such an important part in lives of people shouldn’t be approached so lightly. Yet it is very likely that we suffer from this very approach – and have been suffering for generations. Why are children so inclined to skip school? Why would most of them play video games rather than do their homework? Why are children and young people disinterested in what really matters to them?

After all, gamification doesn’t presuppose the lack of seriousness. It simply takes human behaviors that are already there and employs them for the benefit of education. Perhaps it is exactly what we need?