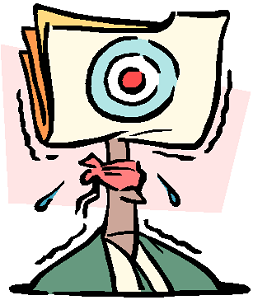 There are so many things to remember when writing an essay. Make sure you reference sources correctly. Make sure you number your pages (apparently, hurriedly scribbling the numbers on the bottom of your page as you’re running to hand it in on time won’t do). For Christ’s sake, run spellcheck at least once. So we’ve narrowed down a list of three fatal flaws to avoid when you’re putting together your next essay. Trust us, you’ll thank us later.

Bad: Smith, who enjoyed the movies of Martin Scorcese, ran for Governor of California in 1986.

Good: Smith ran for Governor of California in 1986.

You see how ridiculous going off-topic sounds? It might be tempting to swerve off topic to fill space or discuss a great idea you’ve had that’s unrelated to the question but just so interesting, but it’s a deadly habit that will get you marked down, as it can come across as if you don’t understand the question. Keep the question pinned up on your computer, or at the top of your page, or tattooed on the back of your hand if that’s what it takes – just make sure you don’t stick in anything that you can’t directly link back to your argument. It helps to have your conclusion in your head too, so you know what you’re working towards and don’t accidentally throw in statements that entirely undermine your argument (debate is good, derailing your entire essay is not).

Mistake #2. No Evidence of Research

Bad: Smith was elected in 1987 as Governor of California, even though some people objected to it.

Good: Smith won the election for the post of Governor of California in 1987 by a landslide of 106,000 votes, even though some contemporary commentators- such as historian Paul Pope and previous governor Nathan Day- objected to this result.

The difference between these two sentences is not the research that was done, but the way it’s expressed. Showing evidence of your research doesn’t mean cramming in quote after quote, or filling your essay entirely with other people’s ideas – it means using the studying you’ve done and the knowledge you’ve gained to add colour and background to your essay, rendering it a more interesting, informative piece of writing that shows you’ve done background research and know what you are talking about. Think of it as colouring in the black-and-white line drawings when you were a kid – except you’re using your crayons of knowledge and the pencils of good academic habit. Which is much more grown up.

Bad: Smith was widely trusted by the community and respected as governor, despite his several shortcomings.

Good: As Paul Pope wrote in his autobiography, “Smith was widely trusted by the community and respected as governor, despite his several shortcomings” OR Paul Pope commented on the respect Smith garnered from the general public in spite of his numerous problems.

I think everyone spends their entire academic career living in a paralysing fear of plagiarising. Now, some people do this deliberately – but what if you do it by accident? The best way to avoid this is to make sure your research credits ideas to their author – it’s very easy to glance over your notes, see a great point that you’ve forgotten you didn’t come up with, and accidentally pass it off as your own. Be sure to attribute every idea that isn’t your own directly to the person who thought it up, whether you’re quoting them or paraphrasing what you said.