Civil War in Syria: What Caused the Conflict?

Posted by Charles Beckman on November 7 2014 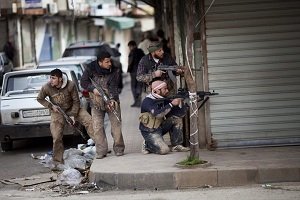 One of the world concerns is the uprising that took place in Syria. Why is there a war conflict in this country? What caused such a tragic moment in Syrian history? Let’s take a look at the most suitable reasons of what has fueled the Syrian Civil War.

Is It About Political Repressions?

The President of the country Bashar al-Assad assumed power in 2000. His father had ruled the country since 1970 and once he passed away, Bashar got an opportunity to become the ruler. In a twinkle of an eye Assad dashed all the hopes for the future country reforms, as the power remained focused exclusively in the arms of the ruling family, and the system of one party left just a couple of channels for possible political dissent. Taking into account the fact that there was no peaceful transfer of political power since 1950s, it seems like only the nation’s uprising or military coup can bring changes to Syria.

Due to the socialism remnants reform the door was opened for the private investment, triggering the consumerism explosion in the midst of the urban upper-middle classes. Nonetheless, privatization favored families with personal connections to the President, leaving the provincial regions of the country, later the uprising hotbed, boiling in anger as there was a lack of jobs and the living costs soared.

The Growth of Population?

The rapidly growing population of the country is a real demographic bomb that will most likely to explode in the nearest future. How can an unproductive and totally bloated public sector as well as struggling private companies open their doors for nearly a quarter of a million new arrivals to the market of jobs every single year? A good reason for the uprising of the nation, as many experts tend to believe.

Although all the media of Syria is kept under a tight control, the satellite television proliferation, the internet and mobile phones after 2000 meant that all government attempts to cut the youth off the outer world was doomed to fail from the very beginning. The new media use is critical to the networks of the activists that add force to the Syrian uprising.

Whether you are in need of getting a car registration or you wish to have a license to open a small store, a simple payment will definitely help you to get what you want. That’s how the things work in Syria. For those people, who have no money and lack solid interpersonal contacts, it is a powerful grievance against the country. Paradoxically, but the whole system in Syria is so corrupted that even the anti-President rebels purchase weapons from the representatives of the government. And what is more, the families simply bribe the authorities in order to release their relatives, who have been imprisoned in the course of uprising.

The Influence of Tunisia?

Last but not least, the huge wall of terror in the country wouldn’t have been broken to this extent has it not been for a Tunisian street vendor Mohamed Bouazizi whose famous self-immolation (that took place in 2010) caused a great number of uprisings all over the Middle East. The sight of the fall of Egyptian and Tunisian regimes in 2011, shown on the TV channel Al Jazeera, provided millions of people in Syria with an opportunity to realize that changes are possible.