In Defense of Black Rage: Michael Brown, Police and the American Dream 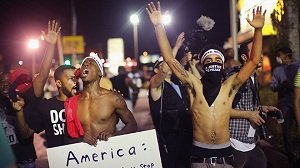 In her well-known article “In Defense of Black Rage: Michael Brown, Police and the American Dream”, Brittney Cooper justifies the civil unrest in Ferguson after the Michael Brown shooting, saying that she doesn’t support looting, but can perfectly understand people outraged by this tragic event.

Michael Brown shooting is a very controversial issue and, just like with most such events, we are very unlikely ever to find out what happened in Ferguson, Missouri on August 9, 2014: either Michael Brown attacked Darren Wilson and kept coming at him, or the latter fired without provocation. We, however, can decide what to think about it all.

Brittney Cooper looks at these events from the position of ‘black rage’ – the term used to justify the outbreaks of violence on the part of African American population because of them being psychologically damaged by living in racist society. According to this doctrine, civil unrest, fights with police, damage of public and private property and looting that happened in the aftermath of Michael Brown shooting are natural consequences of this welled-up rage, and shouldn’t be considered the problem here. The problem, according to her, is that police kills unarmed black teenagers. Which is the direct result of how black population is perceived by whites.

According to Cooper, the problem is that whites are wary of African Americans – they are considered to be dangerous, criminal and untrustworthy in and of themselves. This is what leads to tragedies like the one in question – when an unarmed person is shot dead by the police simply because he is black, young and big (Michael Brown was 6 feet 4 inches tall and weighed 292 lb.).

However, it is hard to say if it is true. The Michael Brown case is just an individual case – and even though it is not the only case of black men being shot by police when it isn’t really necessary, how can we be sure that he was shot because he was black?

The problem is that we cannot look at such things objectively. When a black person is killed in such a fashion, it immediately becomes the stuff of national news: we hear about a new ugly throwback to state-enforced racism, we hear about white police officers massacring innocent black teenagers, we hear about universal atmosphere of hatred and distrust towards African Americans.

But what if a black or Asian American police officer kills an unarmed white person? Such things don’t make it to the news, but not because they don’t happen – they certainly do happen, for mistakes occur no matter how much you try to avoid them. No, that’s all because they simply don’t make as good a story.

Of course it doesn’t mean the society is wrong to draw attention to the Michael Brown case – there are a lot of suspicious aspects to this story. But the protesters seem to fail to understand the simplest thing: it doesn’t matter what his skin color was. All that matters is that an armed policeman shot an unarmed civilian, and it is very hard to find out whether it was justified or not. By attracting attention to the ethnicities of the killer and the killed, by using this even as a pretext for looting and attacking other policemen black people only show that the society indeed has reasons to be wary of them.

Of course it is not okay for policemen to kill those whom they are supposed to protect. But protesters appear to be unable to get rid of the same racist prejudices they condemn: they view this incident as an attack of whites against blacks, not as an attack of the state against the individual, their fellow citizen.