Posted by Kimberly Austin on December 4 2014 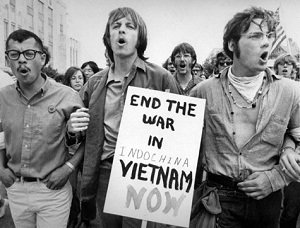 There are two beliefs concerning war that are shared by most people: firstly, that war is certainly a bad thing that should be avoided almost at all costs. Secondly, that sometimes it is impossible to avoid it.

The main idea of anti-war movement in its modern variation is that the second idea is a fallacy – according to them, there is no such thing as just cause, any war is immoral and any alternative is better than fighting in a war.

At a glance, this idea seems to be quite logical: after all, if war can certainly be named among the ultimate evils of human existence, isn’t it right to prefer another alternative? People who fight against the very idea of war are certainly noble and selfless, especially if they do so when being pressurized by the environment.

However, if we look at the history of the movement, we encounter some pretty unpleasant implications.

The anti-war movement in the present meaning of the word came into being in the wake of the World War II. Some of the opposition to the conflict came from ardent pacifists who decried war per se, but mostly the war was opposed by diverse leftist movements who called for the conciliation with the Nazi Germany on Hitler’s terms and avoiding taking part in the conflict for one simple reason they don’t like to be reminded of: they were moved by purely political motives. The Third Reich and the Soviets signed the Molotov-Ribbentrop Pact, divided Europe into their respective spheres of influence and generally were on friendly terms. Opposing the war meant supporting the politics of the USSR. As soon as Hitler backstabbed his ally in 1941 all these leftist movements turned into staunch supporters of war without missing a beat.

And, unfortunately, modern anti-war movements are direct descendants of these WWII-era leftist organizations. They are, in fact, more concerned with opposing the politics of the USA and their allies than with opposing war as such. Logically, an anti-war movement isn’t supposed to take sides: it should be opposed to the war itself. Yet they never fail to choose with whom their sympathies lie: with Northern Vietnamese in Vietnam war, with Arabs in the Arab-Israeli conflict, with Iraq in Iraq war and so on. Anti-war movements are almost universally leftist movements opposing the West and supporting its enemies.

Of course war is a horrible thing; nobody would disagree with this statement. But the idea that war is the worst evil in existence is very much subject to doubt. At least history shows us time and again that it is not so – that war shouldn’t always be avoided at all costs. Sometimes the cost of avoiding war in the long run may turn out to be much more gruesome than the war itself.

There are powers in this world that do not understand anything but, well, power. There is no point reasoning with them because they perceive it as a sign of weakness. The best example is probably the World War II. Western leaders did their best to avoid war with Nazi Germany and agreed to everything Hitler demanded – only to make him stronger, give him more resourced and, eventually, get a much worse war on their hands. What could have been a local conflict aimed at removing an aspiring dictator turned into a world-spanning massacre that took the lives of, by the most conservative estimate, 50 million people.

The fact that this example didn’t teach the world anything shows only that humanity is utterly incapable of learning from its mistakes – it is no use reasoning and finding a common language with thugs.