Posted by Charles Beckman on November 29 2014 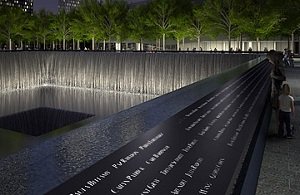 9/11 Memorial or, to be more precise, National September 11 Memorial & Museum, is a memorial dedicated to the memory of the greatest tragedy in American history – the terrorist attacks of September 11, 2001, which took lives of 2,997 people. It is also often considered to be the largest and the most expensive memorial in the country – the construction costs are said to exceed $1 billion, even though original design was estimated at $500,000.

The Memorial consists of several objects in this or that way commemorating the September 11 attacks. The main element of the Memorial are two enormous pools with largest man-made waterfalls in the United States, located at exact spots the twin towers of the World Trade Center once stood. They symbolize the emptiness and void left after the destruction of the WTC and the death of those who worked there. Although the Memorial is located in the middle of New York, the sound of water falling muffles the noise of the city, which means that nothing interferes with the solemn atmosphere of the place.

The pools are surrounded by trees, namely swamp white oaks and American sweetgums, which have been chosen for this role because they grow to 60-80 feet and their lifespan is 300-350 years, which means that they will be standing for years after all who had anything to do with building of the Memorial are long gone.

Another important element of the design is the so-called Survivor Tree – a callery pear that was found in the rubble left after the collapse of the World Trade Center. At the moment it was badly burned and barely alive. Although nobody really believed that it was going to survive, it was replanted in a Bronx nursery and, to universal surprise, showed the signs of new growth the next spring. It was surrounded with new care as an important symbol of hope, preservation of life and rebirth. It, however, wasn’t the end of the tree’s misfortunes – in 2010 it was uprooted by a storm and replanted again – true to its name, it stubbornly refused to die the second time. Later it was relocated to the Memorial, where it is considered to be an important part of the general design and its overall message.

The parapet of Memorial pools has 76 bronze plates attached to it, having the names of all the victims of September 11 terrorist act, plus the names of six people killed in 1993 World Trade Center bombing, thus ensuring that this tragedy will never be forgotten.

However, in addition to the Memorial there is also the Museum of September 11, containing images and artifacts pertaining to the tragedy, audio recordings of stories about the victims and those involved in rescue efforts and video about the events. Its design is worth noting separately – following the principles of deconstructivism, it resembles a partially collapsed building, mirroring the event it is supposed to commemorate.

Its exhibits cover the tragedy in its entirety: there are various parts of the original buildings, damaged and destroyed vehicles that surrounded the World Trade Center at the moment of attack, photographs of wreckage and destruction, phone calls of victims and members of rescue force, recordings of their memories and so on. Despite the topic covered by the exhibition being not a little grim, all possible efforts were made to keep it from being traumatizing, especially for people directly connected to the tragedy.

All in all, 9/11 Memorial fully corresponds to the importance of the event it is commemorating – the most horrific and gruesome tragedy in the entire American history is marked by the most impressive and imposing monument in the country.